Real ‘Tok’: Hacking Influence in the Age of Content

In the last year or two we've lost count of the number of times the word 'unprecedented' has been tossed around. Sure, every jump into the next economic shift is marked by certain waves that affect our cultural perspective – but lately “unprecedented" experiences have allowed us to witness the rare and exciting phenomena. The marketing world is not immune to these waves as these shifts continue to impact the way we consume, share and create content, the people we follow, the brands we trust and the relationships we want to have i.e. what influences us and how we are influenced. 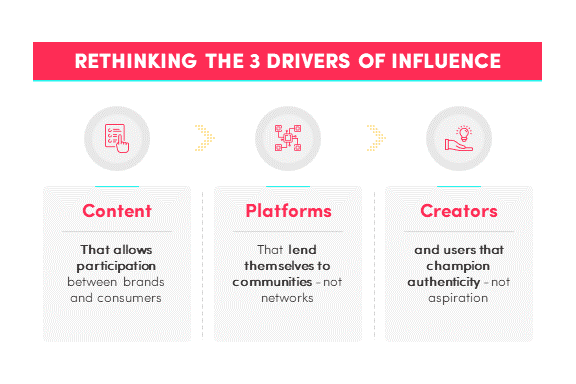 TikTok, which has seen 1 Billion users come to the platform globally every month to be entertained, has been particularly quick to embrace these changes and has become a game-changer in allowing us to re-think the 3 drivers of influence:

Platforms – that lend themselves to communities – not networks

Creators – and users that champion authenticity – not aspiration

Content – that allows participation between brands and consumers – not one-way storytelling.

And these drivers have allowed us to mark and observe the rapid cultural shifts that determine today's new normal. Hacking these cultural shifts in content today is a sure-fire way for brands to ride the wave of viral success.

Creators and Communities that Drive Culture 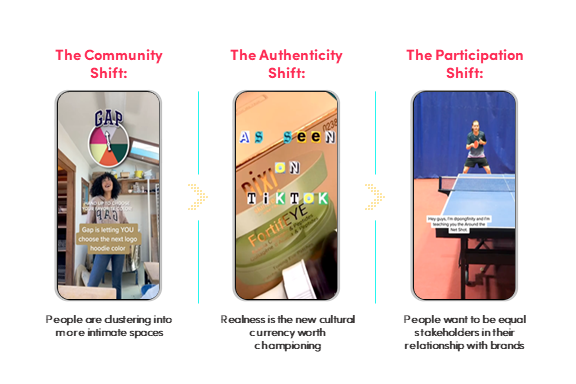 1. The Community Shift: People are clustering into more intimate spaces

In an intriguing piece titled 'Anti-Social Social Media', Sara Wilson in the Harvard Business Review (HBR) writes “after years spent constructing carefully curated online identities and accumulating heaps of online “friends", people want to make real connections based on shared interests." People are clustering to more intimate spaces she dubbed “digital campfires" or communities where they gather around interests, share stories, and converse with one another.
She writes: “If social media can feel like a crowded airport terminal where everyone is allowed, but no one feels particularly excited to be there, digital campfires offer a more intimate oasis where groups of people are excited to gather around shared interests." (Wilson, HBR, 2021).
Part of the excitement is derived from people having the power to choose the spaces they want to be part of, and the content they want to interact with. It's so obvious to us now, that if the content is more relevant – we are more likely to share it and be influenced by it.
In the last decade though it wasn't that obvious because content dissemination was governed by social networks – whereby people get served content based on who they follow. In the last 2 years, community-based platforms took over and we are served relevant content based on our interests. People don't want crowded and curated feeds – they want to create their own unique experiences, relevant only to them, and so no two feeds look exactly the same.
Every day on TikTok, millions of users discover the joy of getting involved in a new community. These communities – often organized around hashtags ending in “Tok" – cover everything from mainstream subjects like being a mom (#momsoftiktok), to more niche topics like assembling mechanical computer keyboards (#keebtok). Hashtags ending in “Tok" have seen a 70% increase in monthly video views in the last year (TikTok Internal Data, METAP, Aug 2020 – Aug 2021).
In light of these new digital behaviours, gaining followers becomes rather futile or at least should not be the only priority. Communities are more influential than a following because while followers are people who passively follow your lead, a community is a group of ambassadors who engage with your brand and with one another, creating movements. Building a community or tapping into one allows your brand to be part of relevant and more intimate cultural conversations and hence build loyalty, retention, and long-term love. To play in this field, we need to think outside of age brackets, generational categories or gender demographics and think of topics – where people are bound by interest and conversation rather than a prescribed identity. It could be said that communities are the new demographic. The below Nike video is an example of sneakerheads creating a community and spiking sales.

2. The Authenticity Shift: Realness is the new cultural currency worth championing

In the last decade we've also witnessed the rise of macro-influencers, watched micro-influencers emerge and are now watching nano-influencers take the fold – all initially categorized by their number of followers and well 'popularity in numbers'. As time progressed, brands realized that 'nano' influencers while they couldn't scale to a wider audience, can be cool in their “nicheness" and engage beyond achieving mere reach.
What we didn't account for was the overwhelming wave of consumers who in the face of (quite literally) picture-perfect lifestyles and “filtered" realities, grew apprehensive of aspirational depictions, regardless of how much smaller their circle of following became. In August 2021, The Guardian published: “Brands and marketers, take note: being too aspirational is repellant now." A new class of influencers or what's been dubbed 'geniunfluencers' (by the trend forecasters WGSN) i.e., those who gain followers by being relatable and relevant rather than aspirational is on the rise.
In an increasingly connected world, we just want to see real lives happen and unfold – no matter how different those experiences are from our own. We want to see imperfections, we want to learn about personal experiences – we want the raw, unedited, behind the scenes look. If social media posts are the end polished result, TikTok videos are the real 'making-of'.
Authenticity in Action on TikTok
Authenticity on TikTok welcomes a fuller and more complete version of life, where good and bad moments can co-exist – dispensing with perfectionism. TikTok shows how today something else defines the world’s most watchable people: they show up as the most who-they- are versions of themselves. The unique video format empowers them to be more candid and real than other feed-posts platforms. In fact, 75% of TikTok users say the app inspires them to be brave and feel free when sharing their experiences (Nielsen, Authenticity study, MENAT, Dec 2020). This new generation of authentic storytellers are pushing the boundaries of content and as a result, 88% of TikTok users find content on TikTok to be unique and different from other platforms (Nielsen, Authenticity study, MENAT, Dec 2020).
Creators on TikTok will never recommend without trial because personal experience is at the heart of their stories.
The #AsSeenOnTikTok that can be seen in some stores or even on a dedicated Amazon page has become a proof stamp that brands can use to reinforce authenticity and trust. Take the example of Starbucks #CofeeLovers below.

3. The Participation Shift: People want to be equal stakeholders in their relationship with brands

Story-telling in ads has long been popular and brands embraced this to build equity and emotionally captivate an audience which has been both useful and enjoyable. We've all been part of creative briefings that “open on a scene" and “end on a shot". Here's the thing though, today consumers have more control over the ads they want to see and how often. Their disinterest in ads is more apparent with 1/3 of people in MENAT blocking ads (Global Web Index, Q1 2021).
As attention becomes the ultimate commodity, oftentimes well-crafted stories can either be clubbed into 'just another ad' or a worse a cliche'. Today, more so than ever, people want to be equal stakeholders in their relationship with brands where campaigns feel interactive versus one-sided. Influence in this instance is the result of a relationship and a collaborative story in the making.
'Storymaking' is the process of making the brand audience the storytellers and a way to market with our audience instead of at them. And that shift has unlocked the power of WOM but at a rapid profitable scale via UGC (User Generated Content).

Brands are expected to be equally authentic to drive trust. But if you think of it in terms of a human characteristic, anyone who is truly authentic rarely draws attention to it. So if you’re perceived as authentic, it’s good for you — but only if others say it about you. In this instance, creator led campaigns are the gateway to brand authenticity and trust. Putting your brand into their hands and stepping out of the way; it's a true sign of a brand open to showing up as its transparent self via those who champion it most.
In the wake of TikTok's unparalleled growth, influence is being re-defined and so too should a marketers' playbook. Three things have been proven to drive influence: communities, authenticity and participation.
The World's Coolest Winter Campaign which was led by the hashtag & #IfYouVisitMe demonstrates the power of creator led campaigns on TikTok under the #TravelTok genre.

The Science That Proves Relevance is the New Reach